Birthplace of the Italian Renaissance

Considered a cultural, artistic, and architectural jewel of Italy, Florence is the birthplace of the Italian Renaissance.

For maps, where to stay, traveler tips, and other tourist information, use the Florence trip planner.

If you are flying in from United States, the closest major airports are Peretola Airport, Pisa International Airport and Bologna Guglielmo Marconi Airport. September in Florence sees daily highs of 78°F and lows of 59°F at night. Finish your sightseeing early on the 30th (Mon) so you can take a train to Pisa.
more less

Things to do in Florence

Known worldwide for the Leaning Tower of Pisa, the city of Pisa historically served as a maritime power in the heart of Tuscany.

For traveler tips, ratings, reviews, and other tourist information, refer to the Pisa trip maker .

Traveling by train from Florence to Pisa takes an hour. Alternatively, you can take a bus; or drive. Expect a daytime high around 78°F in September, and nighttime lows around 59°F. Wrap up your sightseeing on the 2nd (Wed) to allow time to drive to Montalcino.
more less

Things to do in Pisa

In the heart of wine country, the hill town of Montalcino offers a glimpse of untouched medieval-era Tuscany.

To see other places to visit, photos, reviews, and other tourist information, read Montalcino route planner.

Traveling by car from Pisa to Montalcino takes 2.5 hours. Alternatively, you can do a combination of train and bus; or take a bus. October in Montalcino sees daily highs of 73°F and lows of 56°F at night. On the 5th (Sat), wrap the sightseeing up by early afternoon so you can drive to Siena.
more less

Things to do in Montalcino 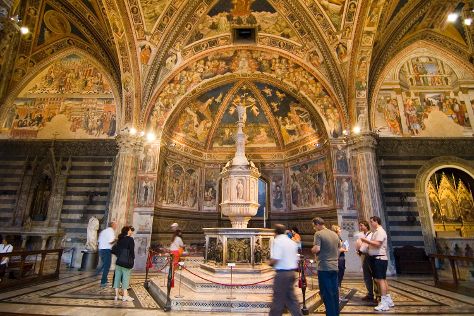 Step off the beaten path and head to Battistero di San Giovanni and Torre e Casa Campatelli. Do some cultural sightseeing at Museo dell'Opera Metropolitana and Pinacoteca Nazionale. The adventure continues: examine the collection at Museo della Tortura, take in the spiritual surroundings of San Francesco, steep yourself in history at Loggia della Mercanzia, and get engrossed in the history at Museo Archeologico di Siena.

To find where to stay, reviews, photos, and tourist information, use the Siena trip planning tool .

Traveling by car from Montalcino to Siena takes an hour. Alternatively, you can do a combination of bus and train; or take a bus. October in Siena sees daily highs of 73°F and lows of 56°F at night. Cap off your sightseeing on the 8th (Tue) early enough to go by car to Rome.
more less

Things to do in Siena

Your day-by-day itinerary now includes Nuovi Quaderni di Capestrano, Officine Creative Roma, Anglo American Book, and other attractions you added. Kick off your visit on the 9th (Wed): stop by Officine Creative Roma, appreciate the extensive heritage of Piazza Navona, look for gifts at Nuovi Quaderni di Capestrano, then hunt for treasures at Porta Portese, then take a stroll through Trastevere, and finally get a taste of local nightlife at Food Tours of Rome. On the 10th (Thu), you'll have a packed day of sightseeing: explore the ancient world of Pantheon, contemplate in the serene atmosphere at Abbey of St. Paul Outside the Walls, explore the world behind art at Palazzo Doria Pamphilj, then look for gifts at Al Sogno, and finally stop by Anglo American Book.

For photos, ratings, traveler tips, and tourist information, you can read our Rome online sightseeing planner .

Getting from Siena to Rome by car takes about 2.5 hours. Other options: take a bus; or take a train. October in Rome sees daily highs of 73°F and lows of 55°F at night. Wrap up your sightseeing by early afternoon on the 11th (Fri) to allow enough time to take a train back home.
more less