Plan created by another user. Make it yours

Venice of the North

Known as one of the greatest small cities in the world, Amsterdam charms visitors with its cool and cozy atmosphere.

On the 3rd (Fri), admire the masterpieces at Van Gogh Museum, thenwalk around Vondelpark, and then indulge your thirst for a good beer at Heineken Experience. Keep things going the next day: get to know the fascinating history of Begijnhof, get engrossed in the history at Anne Frank House, thenexplore the world behind art at Rijksmuseum, and finally explore the world behind art at Museum Het Rembrandthuis (Rembrandt House).

London, UK to Amsterdam is an approximately 4-hour flight. You can also take a train; or do a combination of car and train. Traveling from London to Amsterdam, you'll lose 1 hour due to the time zone difference. In September, daily temperatures in Amsterdam can reach °C, while at night they dip to °C. Wrap up your sightseeing on the 4th (Sat) to allow time to travel to Salzburg.
more less

Things to do in Amsterdam

Rome of the North

Kick off your visit on the 5th (Sun): tour the pleasant surroundings at Mirabell Palace, contemplate the long history of Mozart Residence (Mozart Wohnhaus), admire the striking features of Salzburg Cathedral, thenbrowse the exhibits of Fortress Hohensalzburg Castle, and finally contemplate in the serene atmosphere at St. Peter's Abbey (Stift St. Peter).

To see where to stay, other places to visit, photos, and tourist information, you can read our Salzburg route planner.

Traveling by flight from Amsterdam to Salzburg takes 4.5 hours. Alternatively, you can drive; or take a train. Expect a daytime high around °C in September, and nighttime lows around °C. Finish your sightseeing early on the 5th (Sun) to allow enough time to travel to Vienna.
more less

Things to do in Salzburg

The cultural, economic, and political center of the country, Vienna has developed from its early Celtic and Roman roots into a medieval and Baroque city, with an old town that was designated a World Heritage Site in 2001.

Vienna is known for historic sites, museums, and nightlife. Your plan includes some of its best attractions: step into the grandiose world of Schonbrunn Palace, examine the collection at MuseumsQuartier Wien, explore the world behind art at Kunsthistorisches Museum Wien, and admire the striking features of Belvedere Palace.

To find traveler tips, where to stay, reviews, and other tourist information, read our Vienna attractions planner.

You can fly from Salzburg to Vienna in 3 hours. Other options are to drive; or take a train. In September, daily temperatures in Vienna can reach °C, while at night they dip to °C. Wrap up your sightseeing on the 8th (Wed) to allow time to travel to Athens.
more less

Things to do in Vienna

The Birthplace of Democracy

One of the world's most ancient cities, Athens remains Europe's undisputed historical and cultural capital.

Start off your visit on the 9th (Thu): explore the world behind art at Benaki Museum, thentake a stroll through Plaka, and then steep yourself in history at Acropolis of Athens. Get ready for a full day of sightseeing on the 10th (Fri): explore the world behind art at National Archaeological Museum, thenmake a trip to Plateia Syntagmatos, thenappreciate the history behind Temple of Olympian Zeus, and finally take an in-depth tour of Acropolis Museum.

To see other places to visit, ratings, and tourist information, you can read our Athens journey maker app.

Traveling by flight from Vienna to Athens takes 6 hours. Alternatively, you can drive; or do a combination of bus and train. The time zone changes from Central European Standard Time (CET) to Eastern European Standard Time (EET), which is usually a 1 hour difference. Traveling from Vienna in September, things will get a bit warmer in Athens: highs are around °C and lows about °C. Finish up your sightseeing early on the 10th (Fri) so you can travel to Rome.
more less

Things to do in Athens

Start off your visit on the 11th (Sat): explore the ancient world of Colosseum, get to know the fascinating history of Piazza Navona, thencontemplate the long history of St. Peter's Basilica, thendelve into the distant past at Pantheon, and finally ponder the design of Trevi Fountain.

To plan Rome vacation without wasting time, ask Inspirock to design an itinerary.

You can fly from Athens to Rome in 6 hours. Alternatively, you can do a combination of car and ferry; or do a combination of train, bus, and ferry. Traveling from Athens to Rome, you'll gain 1 hour due to the time zone difference. Plan for a bit cooler nights when traveling from Athens in September since evenings lows in Rome dip to °C. Finish your sightseeing early on the 11th (Sat) to allow enough time to travel to Venice.
more less 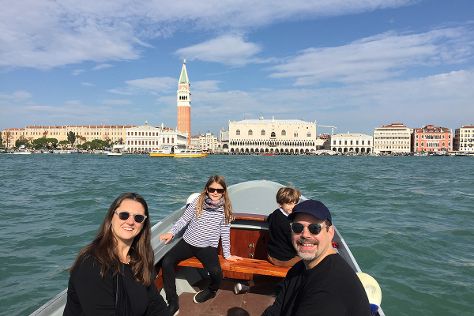 Virtually unchanged for the last six centuries, Venice is actually a group of islands made famous by a series of canals, bridges, monuments, piazzas, and narrow pedestrian lanes.

Change things up with these side-trips from Venice: Padua (Scrovegni Chapel & Basilica of St. Anthony). There's lots more to do: contemplate the waterfront views at Canal Grande, admire the striking features of Basilica di San Marco, snap pictures at Ponte di Rialto, and browse the exhibits of Peggy Guggenheim Collection.

To see maps, where to stay, traveler tips, and other tourist information, use the Venice trip planner.

Getting from Rome to Venice by flight takes about 3.5 hours. Other options: take a train; or drive. Expect a daytime high around °C in September, and nighttime lows around °C. Finish your sightseeing early on the 15th (Wed) so you can travel to Barcelona.
more less

Things to do in Venice

On the 16th (Thu), admire the striking features of Casa Batllo, thenadmire the masterpieces at Museu Picasso, thentake in the architecture and atmosphere at Barcelona Cathedral, and finally take a stroll through El Barri Gòtic. Get ready for a full day of sightseeing on the 17th (Fri): pick up some local products at La Boqueria, stroll around Parc Guell, thenadmire the striking features of Basilica of the Sagrada Familia, and finally admire the landmark architecture of Casa Mila - La Pedrera.

To see maps, ratings, where to stay, and tourist information, you can read our Barcelona tour itinerary builder site.

Traveling by flight from Venice to Barcelona takes 5.5 hours. Alternatively, you can drive; or take a train. Traveling from Venice in September, you can expect nighttime temperatures to be somewhat warmer in Barcelona, with lows of °C. Cap off your sightseeing on the 17th (Fri) early enough to catch the train to Madrid.
more less

On the 18th (Sat), admire the landmark architecture of Royal Palace of Madrid, thenmake a trip to Puerta del Sol, and then explore the world behind art at Prado National Museum. On the 19th (Sun), you'll have a packed day of sightseeing: stroll around Parque del Retiro, contemplate the long history of Plaza Mayor, and then examine the collection at Museo Nacional Thyssen-Bornemisza.

You can take a train from Barcelona to Madrid in 3.5 hours. Alternatively, you can fly; or drive. Expect little chillier evenings in Madrid when traveling from Barcelona in September, with lows around °C. Finish your sightseeing early on the 19th (Sun) to allow enough time to travel to Paris.
more less

A beautiful and romantic city fit for any itinerary, Paris brims with historic associations and remains vastly influential in the realms of culture, art, fashion, food and design.

Paris is known for museums, historic sites, and nightlife. Your plan includes some of its best attractions: steep yourself in history at Eiffel Tower, pause for some serene contemplation at Basilique du Sacre-Coeur de Montmartre, admire the masterpieces at Louvre Museum, and admire the striking features of Sainte-Chapelle.

You can fly from Madrid to Paris in 5.5 hours. Other options are to take a train; or drive. Traveling from Madrid in September, things will get little chillier in Paris: highs are around °C and lows about °C. Finish your sightseeing early on the 22nd (Wed) so you can take a train to London.
more less

Things to do in Paris

Vibrant and noisy, London is one of the world’s leading cities, an international capital of culture, education, fashion, music, finance, trade, and politics.

Start off your visit on the 23rd (Thu): ponder the world of politics at Houses of Parliament, thenadmire the masterpieces at National Gallery, thenstroll around St. James's Park, and finally make a trip to Buckingham Palace. Here are some ideas for day two: take in the architecture and atmosphere at St. Paul's Cathedral, enjoy breathtaking views from Tower Bridge, steep yourself in history at Westminster Abbey, thendon't miss a visit to Big Ben, and finally take in panoramic vistas at Coca-Cola London Eye.

To find ratings, maps, where to stay, and more tourist information, go to the London trip itinerary website.

You can take a train from Paris to London in 3.5 hours. Other options are to fly; or do a combination of car and train. The time zone difference moving from Central European Standard Time to Greenwich Mean Time is minus 1 hour. September in London sees daily highs of °C and lows of °C at night. Finish up your sightseeing early on the 24th (Fri) so you can travel back home.
more less

Things to do in London