Barcelona is known for parks, nightlife, and museums. Your plan includes some of its best attractions: admire the landmark architecture of Basilica of the Sagrada Familia, don't miss a visit to Casa Mila - La Pedrera, pick up some local products at La Boqueria, and pause for some serene contemplation at Barcelona Cathedral.

To find maps, more things to do, reviews, and more tourist information, use the Barcelona holiday builder tool.

Istanbul, Turkey to Barcelona is an approximately 5- hour flight. You can also do a combination of shuttle and flight; or drive. The time zone difference moving from Eastern European Time to Central European Time is minus 2 hours. Traveling from Istanbul in April, expect somewhat warmer with lows of 13°C in Barcelona. Finish your sightseeing early on the 8th (Wed) so you can travel to Ibiza Town.
more less 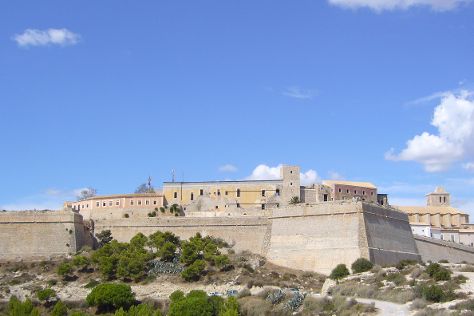 As the island’s largest city and most-visited site, Ibiza is famous for its electric nightlife and lively Mediterranean culture.

Kick off your visit on the 9th (Thu): take in the architecture and atmosphere at Ibiza Cathedral, then see the interesting displays at Necropolis del Puig des Molins, then explore the historical opulence of Castell de Eivissa, and finally get outside with Navegar en Formentera.

To find other places to visit, where to stay, traveler tips, and tourist information, you can read our Ibiza Town trip planning tool.

Fly from Barcelona to Ibiza Town in 3 hours. Alternatively, you can ride a ferry; or do a combination of bus and ferry. April in Ibiza Town sees daily highs of 23°C and lows of 14°C at night. Wrap up your sightseeing on the 9th (Thu) to allow time to travel to Seville.
more less

Things to do in Ibiza Town

A city of rich Moorish heritage, Seville is the cultural and financial center of southern Spain, and the site of numerous festivals throughout the year.

For other places to visit, traveler tips, and tourist information, you can read our Seville day trip planning tool.

Things to do in Seville

Renowned for its deep gorge, the quaint, whitewashed village of Ronda has preserved its charm as an Andalusian country village.

Ronda is known for historic sites, nature, and museums. Your plan includes some of its best attractions: learn about winemaking at Bodega Garcia Hidalgo, bet on your favorite at Ascari, take a stroll through Old City, and walk around Plaza Duquesa de Parcent.

To find other places to visit, maps, and more tourist information, use the Ronda trip planner.

You can take a bus from Seville to Ronda in 2 hours. Alternatively, you can drive; or take a train. In April in Ronda, expect temperatures between 26°C during the day and 12°C at night. Wrap up your sightseeing on the 15th (Wed) early enough to drive to Granada.
more less

Things to do in Ronda

Granada boasts numerous well-preserved examples of exquisite Moorish architecture, not the least of which is the Alhambra, an ancient citadel and royal palace.

Kick off your visit on the 16th (Thu): step into the grandiose world of Alhambra, then make a trip to Court of the Lions, and then admire the natural beauty at Generalife. Keep things going the next day: wander the streets of Albayzin, appreciate the extensive heritage of Mirador de San Nicolas, then indulge in some personalized pampering at some of the best spas, and finally have fun at El Reino Escape Room.

For traveler tips, other places to visit, reviews, and tourist information, go to the Granada planner.

You can drive from Ronda to Granada in 2.5 hours. Other options are to take a train; or take a bus. When traveling from Ronda in April, plan for little chillier days and about the same nights in Granada: temperatures range from 23°C by day to 9°C at night. Finish up your sightseeing early on the 17th (Fri) so you can travel to Madrid.
more less

Things to do in Granada

Madrid is known for museums, historic sites, and parks. Your plan includes some of its best attractions: admire the masterpieces at Prado National Museum, stroll around Parque del Retiro, indulge your taste buds at Food & Drink, and steep yourself in history at Plaza Mayor.

You can fly from Granada to Madrid in 4 hours. Other options are to drive; or take a bus. April in Madrid sees daily highs of 22°C and lows of 9°C at night. Wrap up your sightseeing on the 20th (Mon) to allow time to travel back home.
more less