Thanks to the island's outstanding scuba diving and snorkeling options, Cozumel tourism sector remains a major employer and the main source of income for this Caribbean getaway.

Kick off your visit on the 13th (Thu): see the vivid underwater world at Santa Rosa Wall. Here are some ideas for day two: head outdoors with Paradise Beach Cozumel and then take in the dramatic natural features at Palancar Reef.

To see where to stay, reviews, photos, and other tourist information, you can read our Cozumel route planner.

Washington DC, USA to Cozumel is an approximately 9-hour flight. You can also do a combination of car and ferry. Expect a bit warmer evenings in Cozumel when traveling from Washington DC in September, with lows around 72°F. Finish up your sightseeing early on the 14th (Fri) so you can travel to Tulum.
more less

Things to do in Cozumel

The only Mayan site built to overlook the ocean, Tulum remains a coastal paradise preserving the last vestiges of a pre-Hispanic civilization.

Discover out-of-the-way places like Paradise Beach and Art Gallery Miniature. Your cultural itinerary includes sights like Tulum Archaeological Site and Balam Art On Feathers. The adventure continues: kick your exploration up a notch at Xel-Ha Park by Xcaret, contemplate the waterfront views at Gran Cenote, and tour the pleasant surroundings at Mayan Beach.

For where to stay, more things to do, and tourist information, read our Tulum trip app.

Things to do in Tulum

Xel-Ha Park by Xcaret
Find places to stay Sep 14 — 17:
Hotels on Booking.com
Highlights from your plan

Featuring the largest archeological site of the ancient Mayan civilization, Chichen Itza remains one of the most visited tourist destinations in Mexico.

On the 18th (Tue), explore the ancient world of Chichen Itza and then Head underground at Cenote Yokdzonot.

Getting from Tulum to Chichen Itza by car takes about 2 hours. Other options: take a shuttle; or take a bus. Traveling from Tulum in September, plan for a bit warmer nights in Chichen Itza, with lows around 79°F. Finish up your sightseeing early on the 18th (Tue) so you can travel to Mexico City.
more less

Things to do in Chichen Itza

On the 19th (Wed), admire the striking features of National Palace (Palacio Nacional), then explore the world behind art at Palacio de Bellas Artes, then take an in-depth tour of Museo Nacional de Antropologia, and finally visit Coyoacan. On the 20th (Thu), you'll have a packed day of sightseeing: see the interesting displays at Museo Frida Kahlo, then appreciate the extensive heritage of Zocalo, then explore the ancient world of Museo del Templo Mayor, and finally take in the spiritual surroundings of Metropolitan Cathedral (Catedral Metropolitana).

For reviews, more things to do, where to stay, and tourist information, use the Mexico City trip itinerary planner.

Things to do in Mexico City 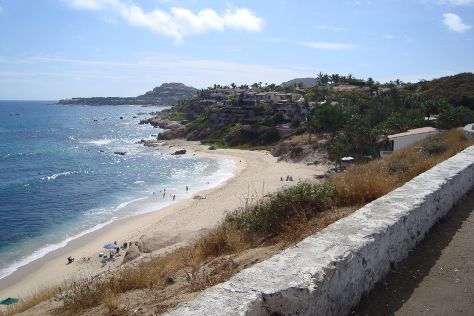 For traveler tips, photos, other places to visit, and other tourist information, read our Cabo San Lucas travel planning app.

Things to do in Cabo San Lucas